This is my application page for the Kleiner Perkins Design Fellow (Intern) position. Here you can find my responses to the personal statement questions as well as the design challenge.

What impact do you want to have on the world and why?

“When a designer creates something new, she is giving form to a thought that allows other people to become more than they were. … those new designs build new minds--just as Steve Jobs suggested when he called the computer a ‘bicycle for the mind,’ a device that would allow the power of thought to travel further, and as Doug Engelbart hoped for when he dreamed of using computers to accelerate human potential.” - Cliff Kuang
I believe tools are central to the human experience in that they empower us to do anything we possibly can. Tools are what make us, us. Under that belief it is imperative we build tools that empower all those around us and further allow us to help lift each other up. I want my impact to be the medium through which others can further their potential.
More specifically, I want to build tools that would augment collaboration, because when we work together we reach places that we individually cannot. In addition to that, I want what I create to encourage as much interdisciplinary interaction as possible. Always passionate about blending my interest in art and science, growing up I was seen as the one with bizarre ideas - sometimes even considered “lost”. People overlook the power of connecting ideas and find comfort in boxing their minds. Through my tools, I want to enable collaboration across disciplines and people so that ideas can be found in unlikely places and with unlikely people.

Describe your most meaningful experience(s) and why they matter to you.

August 2016: I gave my final speech as Head Girl, recalling my voice from the year before. The tone that was shaky then resonated with confidence. In that year, I had often faltered. People change with success; I evolve with my defeat. My mistakes were my catalysts. My perception of criticism changed from sharp thorns to words that motivate change.
‍
August 2017: I moved to a different country for college, a place I had never seen before. Brown was an abstract concept in my head for which I was letting go of everything familiar to me. Sure, there have been moments of doubt. But three years later if you ask me, this is a gamble I’d take in a heartbeat.
‍
November 2018: I created my first large-scale kinetic installation by recreating the experience of staring at the ocean. When strangers stopped to meditate in its tranquility, I understood the effect of building a meaningful experience for others.
‍
March 2019: I tried surfing for the first time. Each instance I fell off the board, I had to stay fully concentrated and climb back on — this was the happiest I’d been in months. I thrive in experiences where I’m completely immersed, without worrying about failure.
‍
These events appear disjoint, but they make up my value system now: learning from failure, taking a leap of faith, creating experiences that impact others and always trying new things. These values guide my actions and shape the path before me.

For this design challenge, I was supposed to redesign a feature from any of the companies participating in the Fellows program. After much deliberation, I chose to redesign Pinterest's Organize feature because of its current inefficiencies and potential for improvement.

Pinterest has a simple enough mission: communicating ideas through images. It relies on digitalizing the metaphor of a pinboard, a space where you would put up ideas, reminders, calendars, etc all in the form of visual blocks. If something is important enough that you want it on your visual radar, you pin it. However, there's one part of this metaphor that Pinterest fails to deliver effectively: the organization. In real life, you're free to move your pins around as much as you'd like and group them however you want. Pinterest lets you create different "boards" so you can group things at a higher level, but what about organization beyond that? What if you were creating a board for cars but wanted to further group your pins based on the type of car it was (sedan, SUV, etc)?

A few years ago Pinterest announced the release of a feature called "Sections" - basically an attempt to address the exact kind of need described above. However, this new organization feature did little justice to the users who wanted to derive pleasure out of hyper-sorting their Pinterest space. I believe that the way Sections' user experience was designed, it failed to sufficiently meet its users needs. This happened due to two main reasons: inefficiency and lack of visibility. In my redesign of Sections, I'll attempt to address these particular challenges and find a solution that would make users more likely to use this feature.

Before diving into prototyping, I had to challenge my assumptions. I felt that the Sections feature is inefficient and has poor visibility. However, was that really true? As a designer, it's extremely important for me to step outside my own assumptions to meet the users' needs successfully. I set out to do a quick survey where I tried to understand how many of Pinterest's active users actually divided their boards in sections.

56% of my total (32) respondents use Pinterest at least 2-3 times a month, with around 13% using it every day. All of these 19 active users indicated having at least 2 boards to help organize their ideas on Pinterest. Yet, a whooping 14 responders (~44% of total!) had 0 sections. All of these 14 people had either at least used Pinterest once or had more than 2 boards.

Here's a possible explanation: they just don't like that much organization.

Nope. When asked to explain why don't they use sections, 9 active users mentioned they didn't even know this feature existed.

Sections is a feature that has been released for multiple years now and users who use it at least one a month have had at least 30 chances to come across it by now. The fact that Pinterest still hasn't successfully made this possibility known confirms my original hypothesis about the lack of visibility for this feature. At least 2 users noted not wanting to use sections because of the amount of effort it took to create them, hence pointing to the lack of efficiency for those who at least know about it.

There's a real problem here and I want to help fix it.

Now that we've defined the problem that exists, there also needs to be some context around why this problem needs fixing in the first place. For this, I circled back to some of the user needs I mentioned above, such as wanting to organize pins at a more specific level. To continue a similar exercise, I created some user personas informed by some of the survey responses I received to reveal user needs. 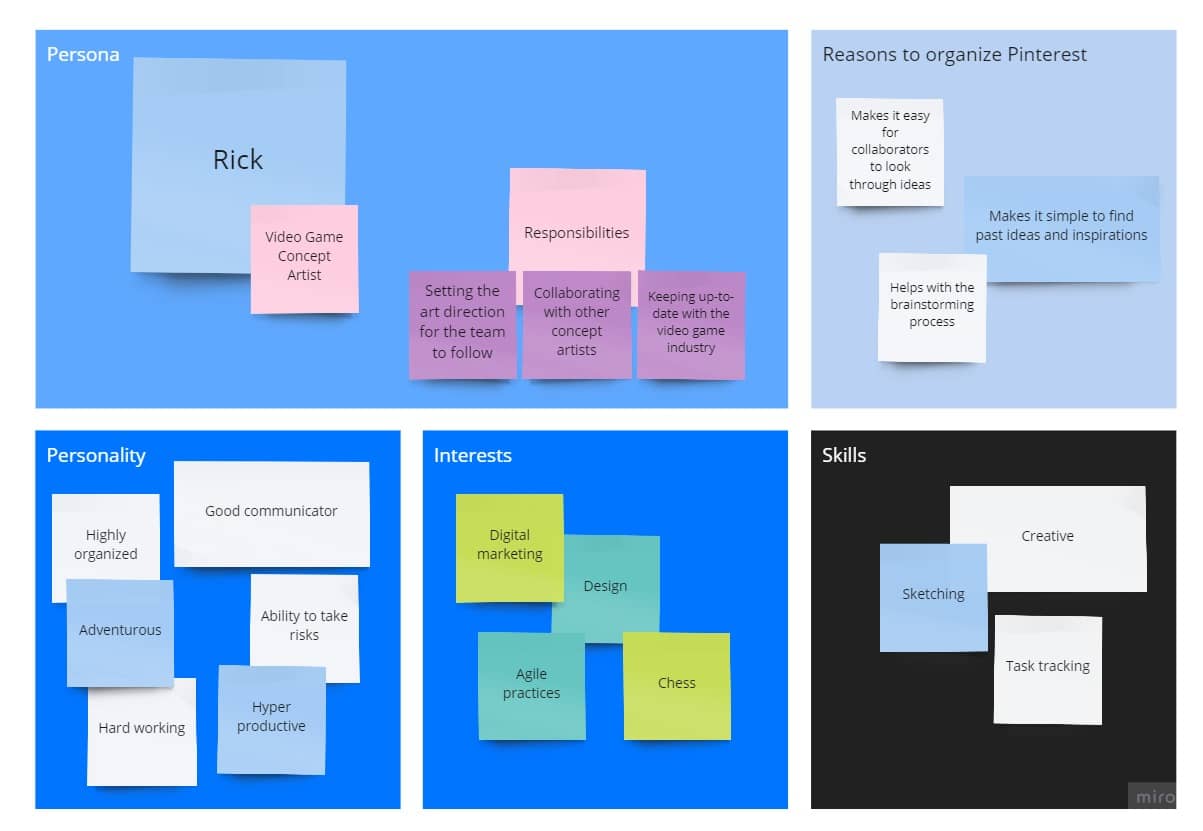 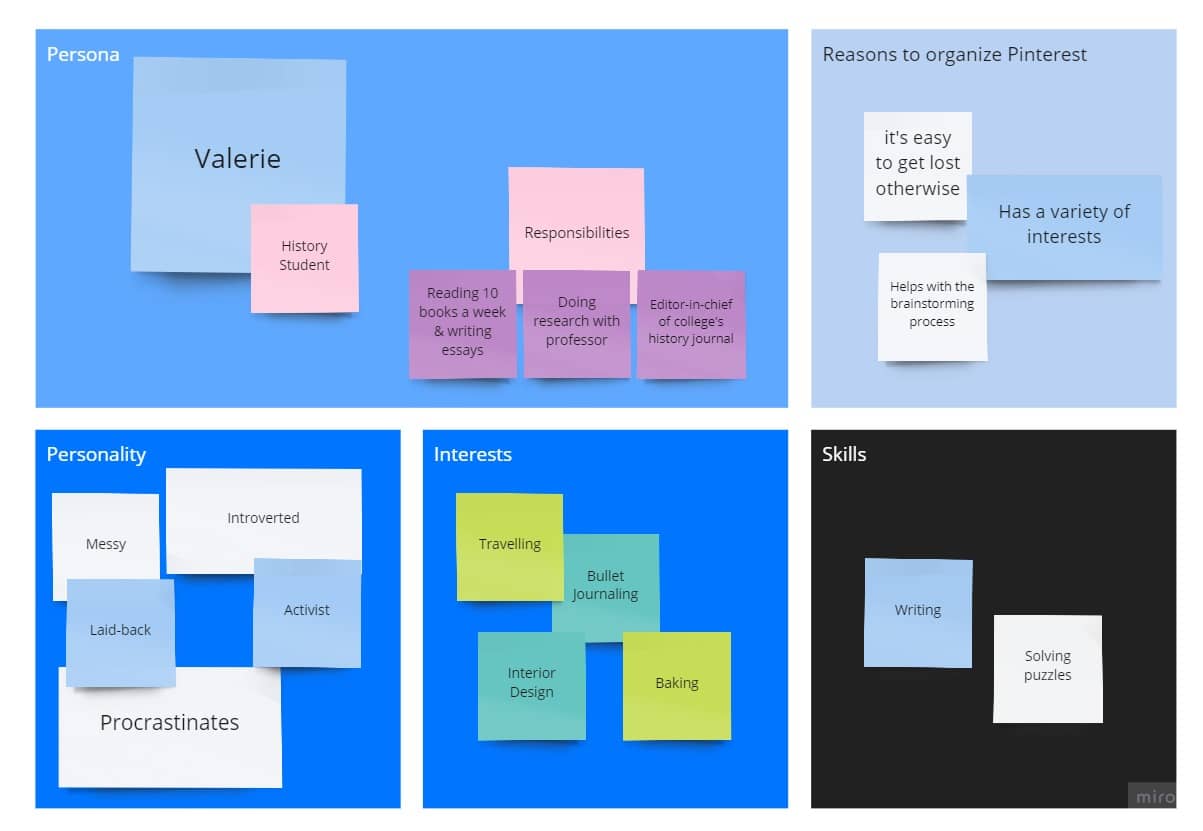 To make sure my designs address the users' needs, I outlined goals that need to be achieved by the Section Organizing feature and put these goals next to relevant user context. This context is derived from the different personas I came up with, allowing me to think of different scenarios that this feature might be useful within.

Before I continue,  I want to acknowledge how sketching personas can all too often exclude some users the designers didn't stop to think of. Given the limited time frame of this task, I think creating personas is helpful to define user context that considers a variety of perspectives. If I had more time, I would base these personas on real user interviews and research to avoid any bias caused by my own assumptions. 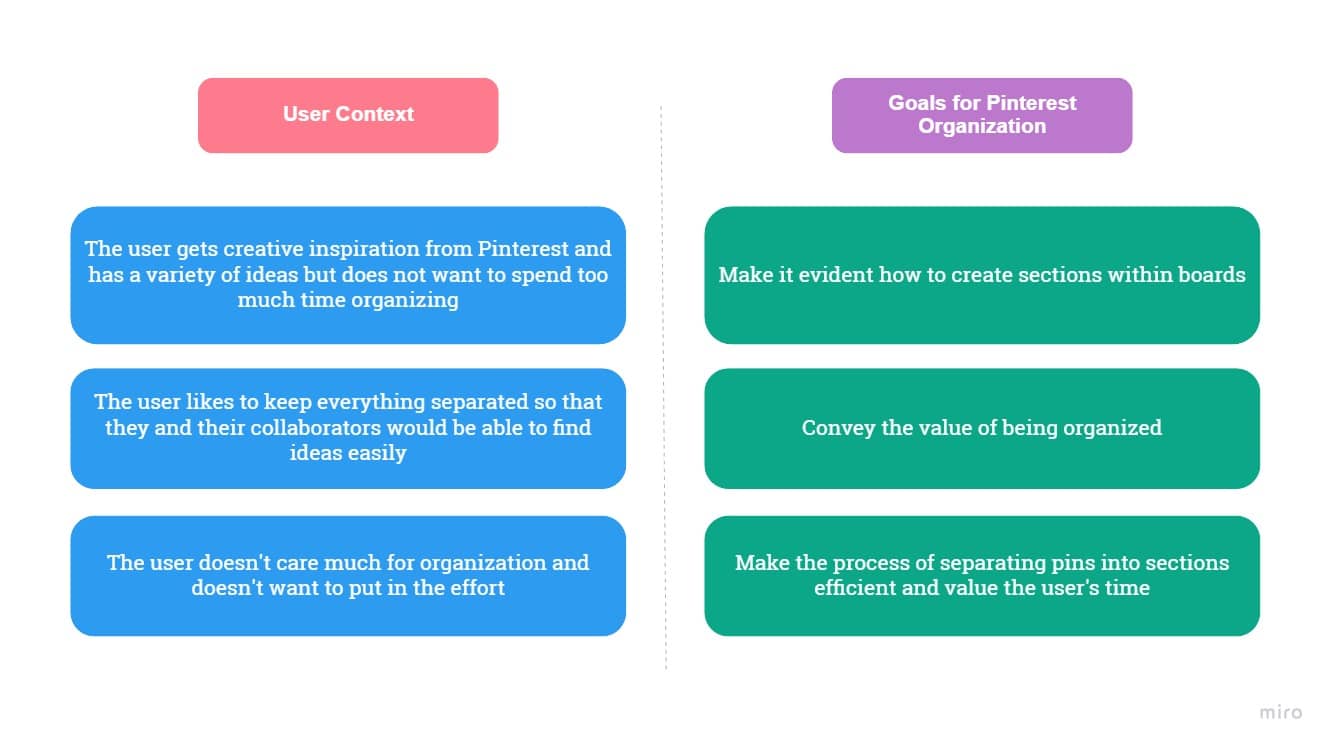 As of now, creating a Section on Pinterest is a 5 step process:
- Click on "Organize" which takes you to a new page showing the same board
- Select all the pins you want grouped under this new Section
- Click "Move"
- Click "Add Section"
- Name your Section and click "Add"

If you don't know exactly what you're looking for, you can only hope to accidentally stumble across this feature someday. This shows both lack of visibility as well as inefficiency. This does not address the need of valuing the user's time and the goal of "make it evident how to create Sections".

I've taken screenshots from my own Pinterest going through this process to help you visualize exactly how it works.

For the Sections feature to be more visible and efficient, I propose a few different changes:

1) I want creating a new section to match the mental model of creating a new board hence I designed a "New Section" button to sit right on your board's main page. This reduces creating a new Section down to two steps (instead of the original five).

2) Redesigning "Organize" to just be a "mode" of the main board page as oppose to an entire page of its own. This way, as soon as you've freshly created your new Section, you would automatically enter the "Organize" mode where you can pick and choose the pins that go inside this section.

3) Instead of going through the "Move" button, you can drag and drop the selected pins into the relevant section, since it already exists (as opposed to the original flow where you select the pins first and then create the section).

4) Adding short tooltips next to the newly added buttons to increase visibility for current users. The tooltip would say something like: "New! You can now organize your boards by splitting the pins into sections to make browsing through your board more efficient". This would also address the goal of "conveying the importance of organizing to the user".

Here are mid-fidelity screens of my idea that I created using Figma:

I redesigned the user journey for the Sections feature in Pinterest. I identified the problem by creating a hypothesis and testing it against preliminary user research. With baseline insights, I created user personas. I further used these personas to inform user context and goals for this particular feature. From here, I identified the specific problems with Pinterest's current version that was making this feature inefficient and unintuitive. Finally, I used an iterative process to come up with a more efficient user experience (low-fidelity sketches from process not shown).

Here are some next steps I would take if I were to continue working on this task:
- Collecting more extensive user research to base personas and user goals around and to address any potential assumptions of my own.
- Addressing other areas such as errors and feedback and creating a fail-safe system for unexpected behavior.
- Considering user scenarios beyond the ones I limited myself to.
- More brainstorming and divergent-thinking for specifics of visuals (for both the carousel and tooltips).
- Creating higher-fidelity mockups for conveying my ideas more visually and accurately.
- Iterating more on the designs and user testing to refine ideas.

Thanks for reading this far!