November 2018
‍
Team Size: 4
Vertoe UX Design is a group project that explores the user experience for an application that provides storage. The designs are for a startup called Vertoe that specializes in short-term storage through liaison between travelers and locals with available space.
This project emphasized the process of iterative design-thinking and user testing. We went from sketching low-fidelity prototypes to conducting eye-tracking tests on users on a high-fidelity prototype.

Note: this project was not sponsored by the company and was solely conducted on my group’s end. 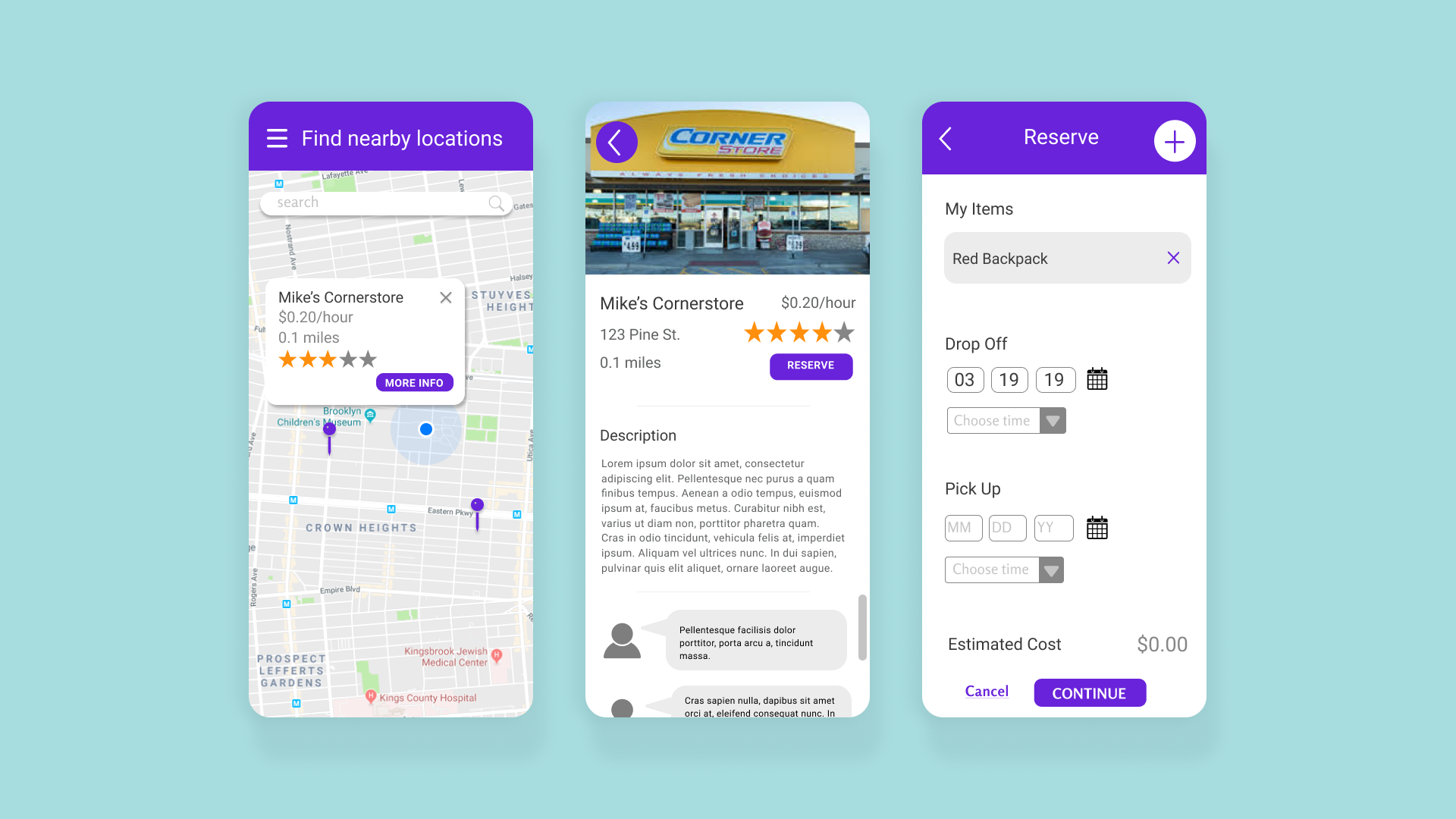 My team designed the interface for Vertoe’s mobile app by iterating from low-fidelity sketches to a high-fidelity prototype. This let us develop an idea from the ground-up to a finalized product while considering different versions.

Vertoe is an emerging startup that offers on-demand short-term storage for personal belongings in cities by utilizing extra space in local establishments. Vertoe is addressing the problem of what you do with your things when you don’t want to lug them around but also don’t have a place to safely keep them.  Our challenge was to only use the startup’s text description when creating our version of their application so we don't bias our ideas with what already exists.

All the sketches focus on different aspects of the app conceptually. For example, while one puts a lot of emphasis on the users through profile features and another tries to pay more attention to navigational menus and transitions. 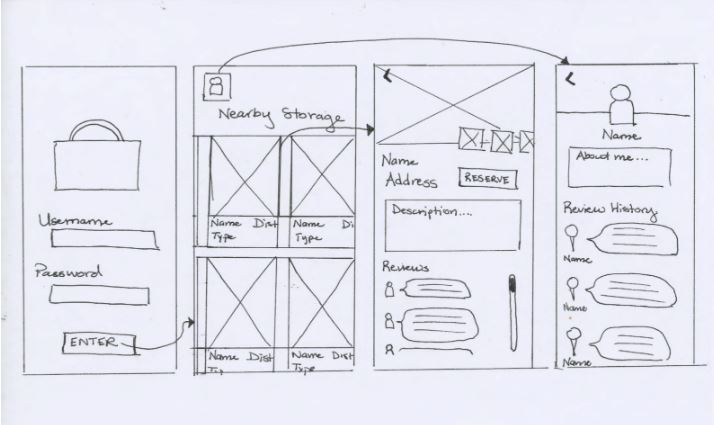 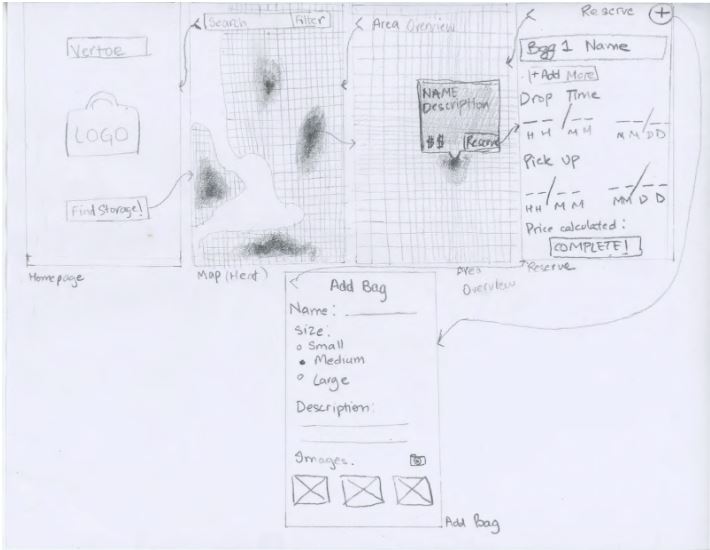 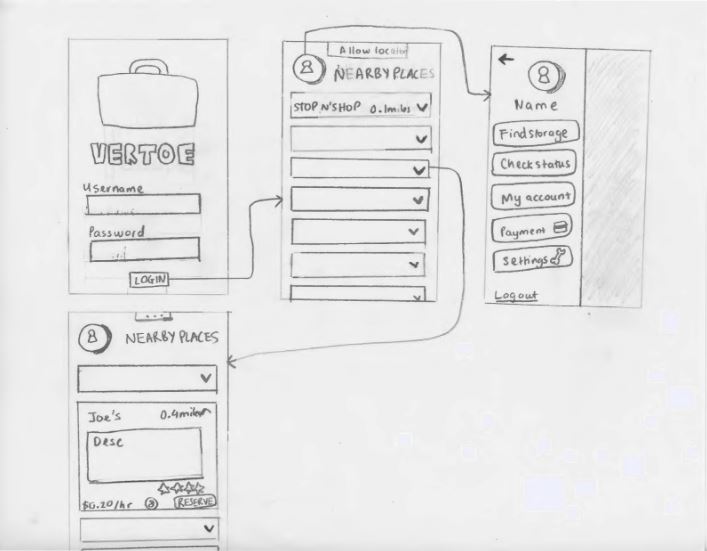 Goal: synthesizing our original sketches into an interactive high-fidelity prototype.

Outcome:
- We adapted the location's description page from a sketch, as allowing users to see pictures and read reviews for locations promotes a sense of security and trustworthiness.
- The final reservation flow we used was from another sketch, as we felt that being able to add a description and images of belongings was an important security feature.
- Our third sketch gave us our side menu design which makes navigation accessible throughout the app.
- We chose to use a map to display locations as opposed to a list or grid view because users are most likely to be using the app on the go, and it is visually easier to evaluate the convenience of distance and location on a map view.

This hi-fi prototype does not include every possible screen in the app, but enough to navigate through its main functionality. Here are some sample screens: 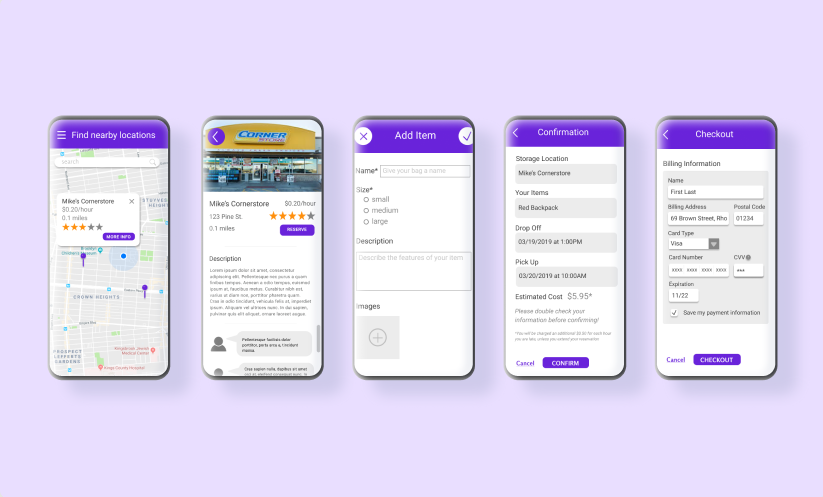 Goal: grounding our ideas in data

Outcome: we recruited a participant who would use our app while an eye-tracker registered their movements. I converted the data to heat-maps that were overlaid on our screen using a python script. We gained a precise understanding of where our viewers spent most time looking at.

We had a specific task for our user: "You want to make a reservation at Mike’s Cornerstore. You have one small red backpack. You need to drop off this item at 1:00 pm on March 19 and pick it up at 10:00 am on March 20." We hypothesized that the user would spend some time looking at the three pins on the map screen whereas they would spend very little time looking through reviews since they had the certainty of wanting to make a reservation. I wrote a python script that visualized the data into the screens that can be seen below. 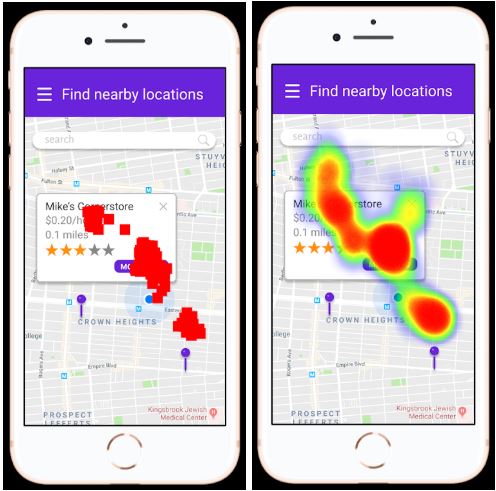 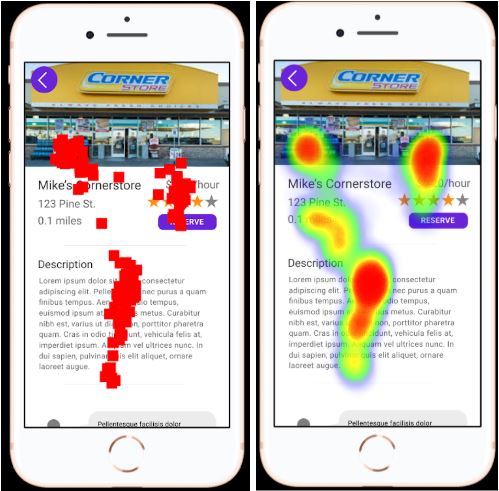 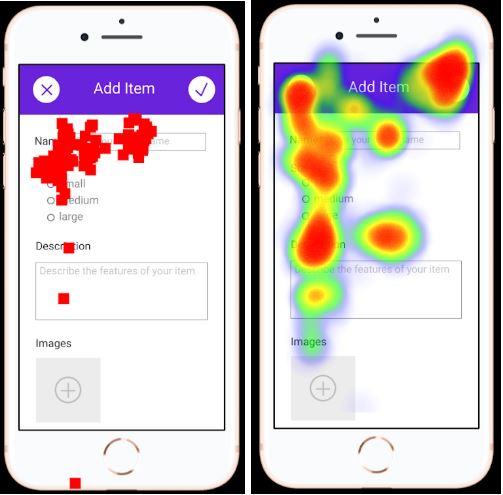 The data clearly showed that the user paid more attention to certain areas over others. It confirmed some of our placement choices such as the "reserve" button alongside the number of starts since the user spent a decent amount of attention there. The pop box on the map page also successfully did its job and was clearly visible.